Dementia is a syndrome – usually of a chronic or progressive nature – that leads to deterioration in cognitive function (i.e. the ability to process thought) beyond what might be expected from the usual consequences of biological aging. The symptoms involve progressive impairments in memory, thinking, and behavior, which negatively impact a person's ability to function and carry out everyday activities. Aside from memory impairment and a disruption in thought patterns, the most common symptoms include emotional problems, difficulties with language, and decreased motivation. Dementia ultimately has a significant effect on the individual, caregivers, and relationships in general. 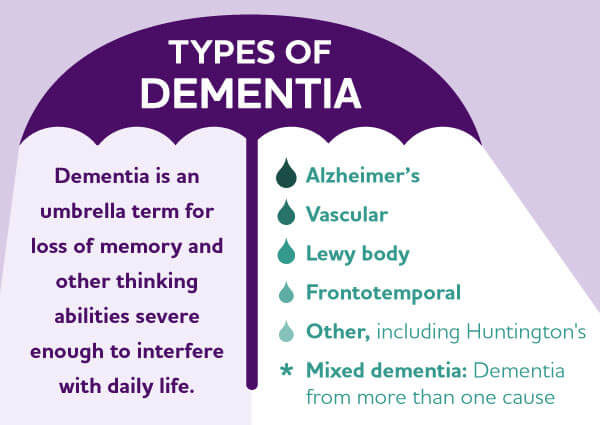 Several diseases and injuries to the brain, such as a stroke, can give rise to dementia. However, the most common cause is Alzheimer's disease, a neurodegenerative disorder. Dementia is caused by damage to or loss of nerve cells and their connections in the brain. Depending on the area of the brain that's damaged, dementia can affect people differently and cause different symptoms. Causative subtypes of dementia may be based on a known potential cause such as Parkinson's disease, for Parkinson's disease dementia; Huntington's disease for Huntington's disease dementia; vascular disease for vascular dementia; brain injury including stroke often results in vascular dementia; or many other medical conditions including HIV infection for HIV dementia; and prion diseases. Subtypes may be based on various symptoms possibly due to a neurodegenerative disorder such as Alzheimer's disease; frontotemporal lobar degeneration for frontotemporal dementia; or Lewy body disease for dementia with Lewy bodies. More than one type of dementia, known as mixed dementia, may exist together.

Worldwide, around 50 million people have dementia, and there are nearly 10 million new cases every year. Two in three people with dementia live in low- and middle-income countries. Dementia is currently the seventh leading cause of death among all diseases and one of the major causes of disability and dependency among older people worldwide. Dementia has physical, psychological, social and economic impacts, not only for people living with dementia, but also for their carers, families and society at large. There is often a lack of awareness and understanding of dementia, resulting in stigmatization and barriers to diagnosis and care.

A Monash University led study has found a promising new treatment for patients with behavioral variant frontotemporal dementia, resulting in a stabilizing of what would normally be escalating behavioral issues, and a slowing of brain shrinkage due to the disease.

Behavioral variant frontotemporal dementia (bvFTD) is one of the clinical syndromes seen in patients with frontotemporal lobar degeneration (FTLD), and is the second most common form of dementia in younger patients. Behavioral variant frontotemporal dementia (bvFTD) is a rapidly progressing destructive disease and can occur in people as young as 35 years of age. It is characterized by behavioral disturbances and personality changes and can be highly disruptive and distressing for both patients and their families. Currently there are no treatments or cures for bvFTD and typical survival is 5-7 years from diagnosis.

Tau-based pathology underlies ≈45% of bvFTD cases, with an excess of hyperphosphorylated tau disassociating from microtubules disrupting axonal transport and neuronal integrity, leading to neurodegeneration. Hyperphosphorylated tau represents a potential target for disease-modifying therapies for the subgroup of bvFTD patients with a tau-based pathology. Protein phosphatase 2 (PP2A) accounts for ≈70% of the phosphatase activity in the brain, and is the primary phosphatase catalyzing the dephosphorylation of tau, and both the levels and activity of this enzyme are reduced in neurodegenerative disease. Therefore, stabilization and upregulation of this enzyme may reduce levels of hyperphosphorylated tau.

Sodium selenate has been shown to specifically upregulate brain PP2A activity and reduce hyperphosphorylated tau levels in animal models of FTD and epilepsy. The Phase 1 trial run in conjunction with the Royal Melbourne Hospital, the only one in Australia targeting non-genetic bvFTD, and one of a handful worldwide, showed that the drug, sodium selenate is safe and well-tolerated in patients with bvFTD over a period of 12 months. Importantly, the majority of patients receiving sodium selenate showed no change in their cognitive or behavioral symptoms, and reduced rates of brain atrophy over the trial period.

The research group is now conducting a larger study at many hospitals across Australia and New Zealand to further test whether this drug is beneficial for patients with bvFTD.

Sodium selenate is the inorganic compound with the formula Na2SeO4, not to be confused with sodium selenite. It exists as the anhydrous salt, the heptahydrate, and the decahydrate.[1] These are white, water-soluble solids. Discovered shortly after the discovery of Selenium by Jöns Jacob Berzelius in 1817, Sodium Selenate was first used as a staining agent for glassware. Despite being a highly toxic chemical, Sodium Selenate is a common ingredient in most multivitamins and livestock feed as a source of Selenium due to its high solubility and relatively low reactivity. Studies focusing on the biological effects of selenium have brought greater attention to Sodium Selenate due to its regulatory role in the function of the PP2A phosphatase protein. This protein plays an important role in angiogenesis and has been linked to cancer cell growth and Alzheimer's progression.

Sodium Selenate has been the spotlight of recent research into the role of protein phosphatases as dephosphorylating agents that limit pro-angiogenic signaling molecules. Selenium, administered in the form of sodium selenite, is reduced to hydrogen selenide (H2Se) in the presence of glutathione (GSH) and subsequently generates superoxide radicals upon reaction with oxygen. This may inhibit the expression and activity of the transcription factor Sp1; in turn Sp1 down-regulates androgen receptor (AR) expression and blocks AR signaling. Eventually, selenium may induce apoptosis in prostate cancer cells and inhibit tumor cell proliferation.