An epileptic seizure, informally known as a seizure, is a period of symptoms due to abnormally excessive or synchronous neuronal activity in the brain. Epileptic seizures are manifestations of epilepsy , a common dynamical disorder second only to stroke among neurological disorders. Epileptic seizures are transient paroxysms of excessive discharge of neurons causing an event which is discernible to the person experiencing it or an observer. The term "seizure" is often used interchangeably with "convulsion." During convulsions a person has uncontrollable shaking that is rapid and rhythmic, with the muscles contracting and relaxing repeatedly. There are many different types of seizures. Some have mild symptoms without shaking. Epileptic seizures are caused by abnormal brain electrical activities that originate primarily in the cortex. One of the most disabling aspects of epilepsy is the seemingly unpredictable nature of seizures. If seizures cannot be controlled, the patient experiences major limitations in family, social, educational, and vocational activities. Temporal lobe epilepsy (TLE) is the most common form of focal-onset epilepsy in adults and accounts for 60% of patients with epileptic. 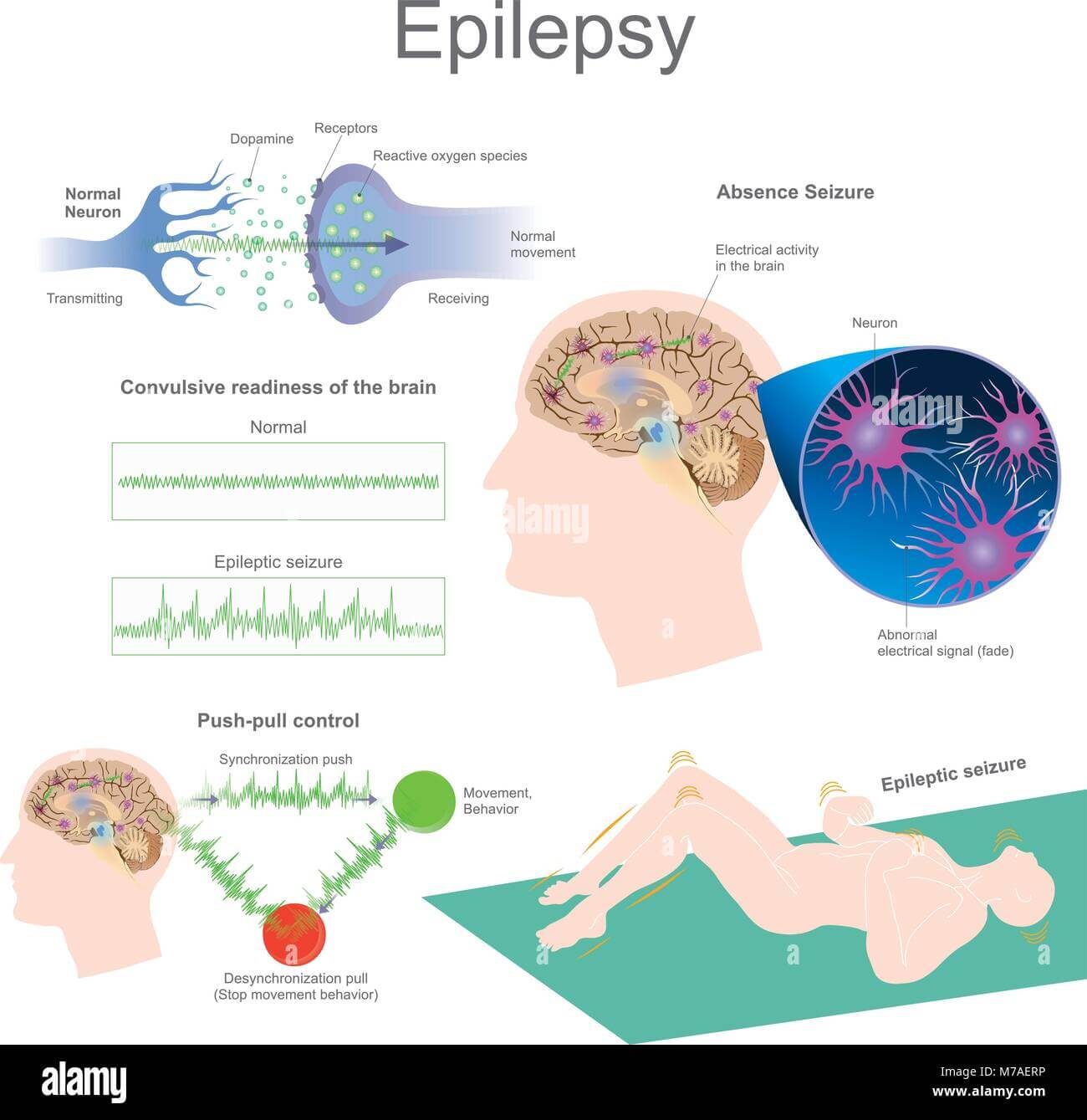 Normally, brain electrical activity is non-synchronous. In epileptic seizures, due to problems within the brain, a group of neurons begin firing in an abnormal, excessive, and synchronized manner. This results in a wave of depolarization known as a paroxysmal depolarizing shift. Forty-one ion-channel genes and over 1,600 ion-channel mutations have been implicated in the development of epileptic seizure. These ion channel mutations tend to confer a depolarized resting state to neurons resulting in pathological hyper-excitability. Equally important in epileptic neuronal hyper-excitability, is the reduction in the activity of inhibitory GABAergic neurons, an effect known as disinhibition. Disinhibition may result from inhibitory neuron loss, dysregulation of axonal sprouting from the inhibitory neurons in regions of neuronal damage, or abnormal GABAergic signaling within the inhibitory neuron.

For 70% of patients with epilepsy, drugs can control seizures. However, they can't cure epilepsy, and most people will need to continue taking medications. If medication fails, your doctor may recommend surgery or vagus nerve stimulation. Dozens of other avenues of research into the causes, treatment, and potential cures for epilepsy are ongoing.

Researchers studying epileptic seizures of the temporal lobe – the most common type of epilepsy – discovered a compound that reduces seizures in the hippocampus, a brain region where many such seizures originate. The compound, known as TC-2153, lessened the severity of seizures in mice.

Emerging evidence suggests that Striatal-Enriched protein tyrosine Phosphatase (STEP) may be a molecular target for seizure treatment. Deletion of the STEP gene PTPN5 results in resistance to pilocarpine-induced seizures and diminishes audiogenic seizures in a fragile X syndrome (FXS) mouse model. This reduction in seizure propensity is puzzling, because loss of STEP would be expected to increase seizure susceptibility by potentiating excitatory synaptic strength. It is possible that genetic deletion of STEP may have compensatory effects on other related genes and/or pathways, thereby complicating the delineation of the role of STEP in seizure susceptibility. Therefore, the researchers from University of Illinois at Urbana-Champaign tested the hypothesis that acute pharmacological inhibition of STEP increases seizure propensity. The results of the study were reported in the journal of Epilepsia.

TC-2153 (8-(trifluoromethyl)-1,2,3,4,5-benzopentathiepin-6-amine hydrochloride) is a selective STEP inhibitor that forms reversible covalent bonds with the cysteine residues near the signature catalytic domain in STEP46 and STEP61. Past studies have shown, despite the low half-maximal inhibitory concentration (IC50) (24.6 nM), a higher concentration of TC-2153 is required to increase Tyr phosphorylation of STEP61 substrates in primary cortical neuronal culture (1–10 μM) and the cortex in vivo (10 mg/kg) and to reverse cognitive deficits in a 3xTg-AD mouse model of Alzheimer's disease (AD), in which these mice display hippocampal hyperactivity and spontaneous seizures.

“We found that TC-2153 ultimately reduces seizure severity in mice by decreasing the activity of hippocampal neurons,” said University of Illinois Urbana-Champaign doctoral candidate Jennifer Walters, who led the research with U. of I. molecular and integrative physiology professor Hee Jung Chung. In this study, we discovered that TC-2153 dampens hippocampal activity and exerts anticonvulsant activity in both C57BL/6J male and female mice against a single systemic injection of kainic acid (KA), which induces status epilepticus (SE) arising from the hippocampus. Furthermore, TC-2153 decreases action potential (AP) firing rate, sag voltage, and hyperpolarization-induced current (Ih) in hippocampal neurons, providing novel evidence that pharmacological inhibition of STEP by TC-2153 downregulates intrinsic neuronal excitability in contrast to its well-known role in synaptic transmission.

In both male and female mice, TC-2153 treatment decreased hippocampal excitability and the severity of KA-induced seizures that arise mostly from the hippocampus (where KA subtype glutamate receptors are highly expressed), especially in the CA3 region compared to other brain regions including amygdala, striatum, and cortex. Therefore, the majority of the antiseizure effect of TC-2153 is likely mediated by STEP61 inhibition in the hippocampus, although the researchers cannot exclude the possible contributions of inhibiting both STEP46 and STEP61 in other brain regions.

The researchers also suggest that future studies shall evaluate the absorption, distribution, metabolism, and excretion properties of TC-2153 in both sexes and use gonadectomy in combination with hormone replacement to confirm whether TC-2153 decreases KA-induced seizure severity by altered pharmacokinetics of TC-2153 or suppressing proconvulsant actions of estrogen or testosterone, and/or potentiating anticonvulsant actions of progesterone. Clinical challenges exist in the use of antiseizure drugs that are ineffective or can differ by sex, urging a need for new therapeutic targets.

8-(Trifluoromethyl)-1,2,3,4,5-benzopentathiepin-6-amine hydrochloride (known as TC-2153) forms a reversible covalent bond with a catalytic cysteine in STEP. This compound was first synthesized at Novosibirsk Institute of Organic Chemistry (Novosibirsk, Russia) and was designed as an antidepressant by Kulikov and colleagues. As reported, brief treatment with TC-2153 is effective in reversing cognitive and memory deficits in a transgenic mouse model of Alzheimer’s disease (3xTg-AD mice) but does not affect Aβ and tau brain pathology of these animals. These results suggest that STEP is a potential target for Alzheimer’s disease drug discovery. TC-2153 can act as a potential hydrogen sulfide donor and thus substantially affect redox homeostasis.