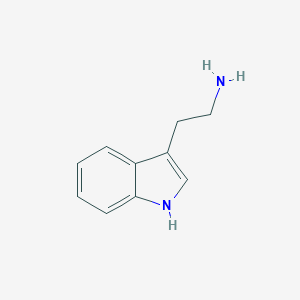 Tryptamine belongs to the class of organic compounds known as tryptamines and derivatives. Tryptamines and derivatives are compounds containing the tryptamine backbone, which is structurally characterized by an indole ring substituted at the 3-position by an ethanamine. Tryptamine exists as a solid, slightly soluble (in water), and an extremely weak acidic (essentially neutral) compound (based on its pKa). Tryptamine has been found in human brain and intestine tissues, and has also been detected in multiple biofluids, such as feces, urine, and blood. Within the cell, tryptamine is primarily located in the cytoplasm. Tryptamine participates in a number of enzymatic reactions. In particular, Tryptamine can be biosynthesized from L-tryptophan;  which is catalyzed by the enzyme aromatic-L-amino-acid decarboxylase. In addition, Tryptamine can be converted into indoleacetaldehyde through the action of the enzyme kynurenine 3-monooxygenase. In humans, tryptamine is involved in the tryptophan metabolism pathway.
Tryptamine is an aminoalkylindole consisting of indole having a 2-aminoethyl group at the 3-position. It has a role as a human metabolite, a plant metabolite and a mouse metabolite. It is an aminoalkylindole, an indole alkaloid, an aralkylamino compound and a member of tryptamines. It is a conjugate base of a tryptaminium.